Based on novel results for smooth and discrete Hodge-type decompositions on manifolds with boundary, this project aims to incorporate discrete boundary-sensitive Hodge decompositions as a central tool for the analysis of blood flow and parameterization of blood vessels. These decompositions provide the following two substantial improvements over existing methods: first, they are able to distinguish harmonic blood flow arising from boundary in- and out flow from harmonic circulations induced by the interior topology of the geometry. Second, they guarantee a theoretically-sound linkage of certain fields with controlled boundary behaviour to cohomological quantities of the geometry, which is the essential and still missing ingredient for the creation of periods to ensure global matching of parameter lines in modern parameterization techniques.

In project C05 “Computational and structural aspects of point set surfaces”, we develop discrete differential geometric representations for point set surfaces and effective computational algorithms. Instead of first reconstructing a triangle based mesh, our operators act directly on the point set data. The concepts have contact to meshless methods and ansatz spaces of radial basis functions. As proof of concept of our theoretical investigations we transfer and implement key algorithms from surface processing, for example, for surface parametrization and for feature aware mesh filtering on point set surfaces.

This project is based on combined efforts in discrete differential geometry and finite element methods for geometric partial differential equations. Especially, discretizations using polyhedral surfaces and piecewise linear functions on them proved to be very successful in both theory and applications. This development led to the creation of counterparts of geometric and metric properties of smooth surfaces on polyhedral surfaces and to insights on convergence properties of them. A geometric ... 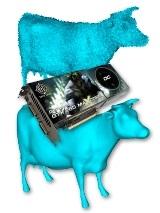 The goal of this project to speed up the computation of curvature flows, previously implemented  on the CPU. This project will in particular demonstrate numerics that fully utilize the SIMT (single-instruction, multiple-thread) architecture of modern Graphics cards (GPU), and provide a proof-of-concept implementation of advanced geometry processing on the GPU. In particular, industrial design and CAD companies could use such fast curvature flow or smoothing algorithms for their laser  ...

For large, nonlinear, and time dependent PDE constrained optimization problems with 3D spatial domain, reduced methods are a viable algorithmic approach. The computation of reduced gradients by adjoint methods requires the storage of 4D data, which can be quite expensive from both a capacity and bandwith point of view. This project investigates lossy compression schemes for storing the state trajectory, based on hierarchical interpolation in adaptively refined meshes as a general predictor. 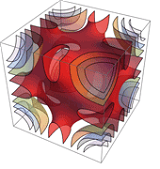 This project addresses the strong needs for multilevel algorithms in industrial applications and in computer graphics where large surface meshes must be efficiently processed. Typical applications are solutions of PDEs on surfaces, surface optimization, and automatic mesh parametrization. Funding is provided by the DFG Research Center MATHEON - "Mathematics for key technologies".

The project develops visualizations and didactic concepts for teaching mathematical algorithms in schools. Understanding how an algorithm works is crucial and often accomplished best by simulating it in some way. Computers provide the means to make these simulations efficient and fun, compared to classical pen-and-paper approaches.

Geometric shape optimization is concerned with novel discrete surface energies and computational geometry algorithms for processing and optimizing polyhedral meshes in industrial applications such as computer aided design (CAD) and computer graphics. The main focus of this project addresses the development of efficient mesh processing algorithms and robust modeling tools. The mathematical tools are novel discrete differential and curvature operators.

This is another project within the DFG Research Center MATHEON - "Mathematics for key technologies".  The main goal of this project is the discretization of classical differential geometry: to find proper discrete analogs of differential geometric objects, notions, and methods, and to develop a corresponding theory. Such a discrete differential geometry has applications in computer graphics, numerics, and visualization.

This project splits into two parts: Mathematical Visualization and web based software on the hand, and Electronic Information and Communication on the other. The goal is the development of multimedia courseware and the establishment of a cooperative networks for enhanced knowledge transfer. "Development of Electronic Information Infrastructure and Multimedia Courseware" is a project within the DAAD-Sonderprogramm "Akademischer Neuaufbau Südosteuropa".