FUB-TAU Joint Research Workshop on Optimization in Graphs and Geometry

This five-day workshop brings together researchers from Israel and Berlin to work on problems related to geometric graphs. 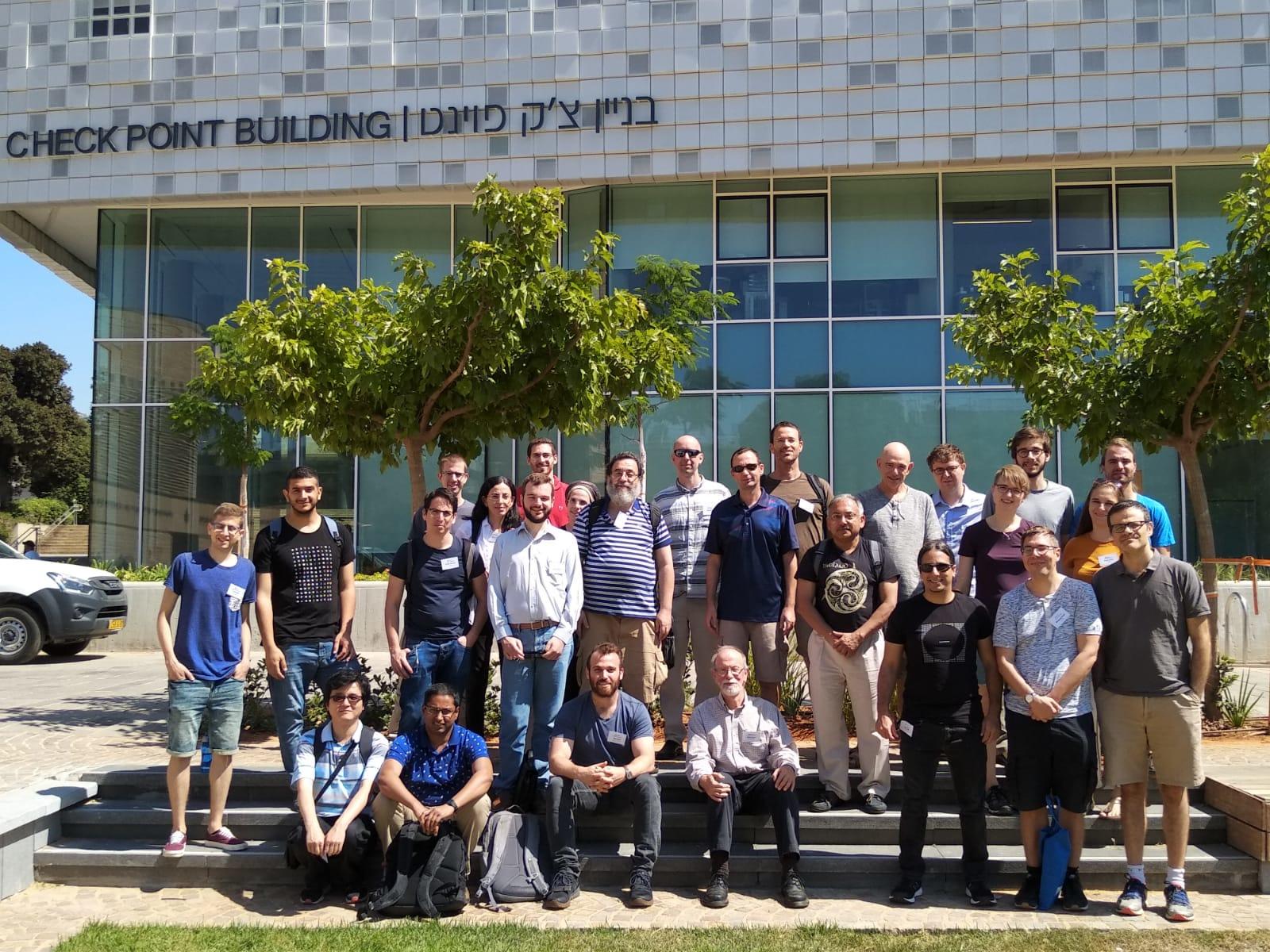 All talks will be held in Room 420, Checkpoint Building, Tel Aviv University Campus.

Abstract. We consider the problem of center-based clustering in low-dimensional Euclidean spaces under the perturbation stability assumption. An instance is r-stable if the underlying optimal clustering continues to remain optimal even when all pairwise distances are arbitrarily perturbed by a factor of at most r. Our main contribution is in presenting efficient exact algorithms for r-stable instances whose running times depend near-linearly on the size of the data set for all clustering objectives when r > 2 + √3. For k-center and k-means problems, our algorithms  also achieve polynomial dependence on the number of clusters, k, when r > 2 + √3 + ε, in any fixed dimension. For k-medians, our algorithms have polynomial dependence on k for r > 5 in any fixed dimension; and r > 2 + √3 in two dimensions.

Abstract. I will give an overview on general techniques to compute approximate incidences [ESA’17, SOCG’19], their  application to the classical camera pose estimation problem that arises in many computer vision applications and their use in navigation application.

Abstract. In this talk I will impersonate Omrit Filtser by presenting her STACS talk. The abstract of the STACS paper was:

Let A and B be two sets of points in R^d, where |A| = |B| = n, so that the distance between them is defined by some bipartite measure dist(A, B). We study several problems in which the goal is to translate the set B, so that dist(A, B) is minimized. The main measures that we consider are

This is joint work with Boris Aronov, Matthew J. Katz, and Khadijeh Sheikhan.

We prove that any set of pairwise intersecting disks in the plane can be stabbed by four points.

Our proof is constructive and yields a linear-time algorithm for finding the points.

Abstract. Tverberg’s theorem is a classic result in discrete geometry. It states that any finite d-dimensional point set of sufficiently large cardinality can be partitioned into k-subsets whose convex hulls have a common intersection. The computational problem of finding such a partition lies in the complexity class PPAD ∩ PLS. Recently, Adiprasito, Bárány, and Mustafa [SODA 2019] proved a no-dimensional version, in which the convex hulls of the sets in the partition may intersect in an approximate fashion. This relaxes the requirement on the size of the point set. The argument is constructive, but does not result in a polynomial-time algorithm. We present an alternative proof for a no-dimensional Tverberg theorem that leads to an efficient algorithm to find the partition. We give similar results for the colorful version of Tverberg theorem and a generalization of the Centerpoint and Ham-Sandwich theorems. To obtain our result, we generalize Sarkaria’s tensor product construction that reduces the Tverberg problem to the Colorful Carathéodory problem.

Abstract. Given three sets A, B, and C of real numbers, the 3SUM problem is to decide whether there is a triple a ∈ A, b ∈ B, c ∈ C that sums to zero. In this talk I will present a natural extension of this problem where A, B, C are three sets of points in the plane, and the sum function is replaced by a polynomial function of constant degree. This problem is referred to as "3POL". This, in particular, includes the problem of collinearity testing in the plane, i.e., deciding whether there is a collinear triple of points–a fundamental problem in computational geometry with no known subquadratic solution.

In this talk I will first discuss the 3SUM problem and its recent developments, including a sketch of the algorithm of Gronlund and Pettie in the linear decision tree model. Then I will discuss the extension to 3POL in the algebraic decision tree model. I will first present the case where A, B, C are one-dimensional sets, which was addressed by Barba et al. (2017), and then present the scenario where these sets are two-dimensional. A main tool in our analysis is the so-called polynomial partitioning technique. As a main consequence of our analysis we obtain strict subquadratic bounds (in the algebraic decision tree model) for (i) collinearity testing, where one of the sets A, B, C is two dimensional (and the other two are one dimensional), and (ii) testing for triangle similarity, where all three sets are two dimensional.

Abstract. Permutation patterns and pattern avoidance have been intensively studied in combinatorics and computer science. A natural algorithmic question is whether a given permutation of length n contains a given pattern of length k.

We give two new algorithms for this well-studied problem, one whose running time is n^{k/4+o(k)}, and a polynomial-space algorithm whose running time is O(1.6181^n). These results improve the earlier best bounds of n^{0.47k+o(k)} and O(1.79^n) due to Ahal and Rabinovich (2000) and Bruner and Lackner (2012), respectively, and are the fastest algorithms for the problem when k ∈ Ω(log n). We show that both our new algorithms and the previous exponential-time algorithms in the literature can be viewed through the unifying lens of constraint-satisfaction. We also look at lower bounds and special cases.

Abstract. I will talk about some recent algorithmic results for (undirected) intersection graphs of disks and and their directed cousins, transmission graphs. Problems of interest are (dynamic) connectivity, shortest path computation, finding the girth, and distributed routing. This is an active area with plenty of challenging open problems, some of which will be mentioned in the talk.

This is the first result in which both the approximation factor is less than 3 and the running time is truly subquadratic.

Abstract. We study the following generalization of the notion of epsilon-nets in hypergraphs. Let H = (V, E) be a hypergraph 0 < eps < 1 a real and t > 1 an integer. We call a family N of subsets (of V) of cardinality t an eps-t-net if every hyperedge S in E with size at least eps|V| contains at least one set from N. When t = 1 this is the classical notion of epsilon-nets. We show that for any constant integers t, d any hypergraph with VC-dimension d admits an eps-t-net of size O((d/eps) log(1/eps)). Joint work with Noga Alon, Bruno Jartoux, Chaya Keller and Yelena Yuditsky.

Uri Stemmer (Ben Gurion University): How to find a point in the convex hull.

Abstract. This task may not be as easy as you think. Please come and see, you will get a lot of open problems to think about...

Abstract. Given a polyhedral workpiece P, which we need to hold, a snapping fixture is a semi-rigid polyhedron G, such that when P and G are well separated, we can push P toward G, slightly bending G on the way, and obtain a configuration, where G is back in its original shape and P and G are inseparable as rigid bodies. We prove a tight bound on the number of "fingers"' that such fixtures should have. We also present an algorithm for the automatic synthesis of such fixtures, which optimizes certain properties of them to make them more useful in practice. We describe two applications where our fixtures are used, with different optimization criteria: Fixtures to hold addons for drones, where we aim to make the fixture as lightweight as possible, and small-scale fixtures to hold precious stones in jewelry, where we aim to maximize the exposure of the stones, namely minimize the obscuring of the workpiece by the fixture.

This is joint work with Efi Fogel and Dan Halperin.

Abstract. Locality Sensitive Hashing (LSH) is an effective method of indexing a set of items to support efficient nearest neighbors queries in high-dimensional spaces. The basic idea of LSH is that similar items should produce hash collisions with higher probability than dissimilar items.

We study LSH for (not necessarily convex) polygons, and use it to give efficient data structures for similar shape retrieval. Arkin et al. represent polygons by their "turning function", a function which follows the angle between the polygon's tangent and the x-axis while traversing the perimeter of the polygon. They define the distance between polygons to be variations of the Lp (for p = 1,2) distance between their turning functions. This metric is invariant under translation, rotation and scaling (and the selection of the initial point on the perimeter) and therefore models well the intuitive notion of shape resemblance.

As part of our analysis, we address the following problem which is of independent interest. Find the vertical translation of a function f that is closest in L1 distance to a function g. We prove tight bounds on the approximation guarantee obtained by the translation which is equal to the difference between the averages of g and f.

Abstract. The set of all triangulations of a finite point set in the plane attains structure via flips: The graph, where two triangulations are adjacent if one can be obtained from the other by an elementary flip. This is an edge flip for full triangulations, or a bistellar flip for partial triangulations (where non-extreme points can be skipped).