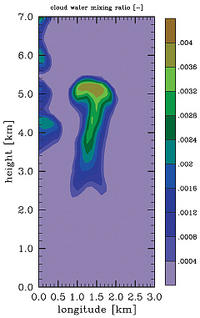 Clouds play a decisive role in both the daily weather pattern and the long-term climate variation. They constitute a moisture reservoir carried by the wind and represent the preliminary stage of precipitation. By reflection, absorption, and transmission of electromagnetic waves in the visible and infrared spectra they influence directly the atmosphere's heat budget..

For theory development and computer simulation clouds pose a particular challenge since they are determined by the interaction of a multitude of individual processes. Some of them take place in the size range of small cloud droplets (micrometres), some in the size range of typical turbulent flow fluctuations (metres), some in the size range of characteristical cumulus clouds (one to ten kilometres). Large stratocumulus cloud layers above the oceans even span several thousands of kilometres. For this reason cloud processes belong to the class of multi scale phenomena investigated intensely by natural scientists and mathematicians these days.

We work amongst others on a theory of describing deep convective clouds, so-called cumulus clouds. The theory is based on the assumption that these clouds reach out deeply into the atmosphere (ca. 5 to 10 km) while concentrating horizontally on a much narrower area of about one kilometre. This anisotropic structure is utilised with the aid of the mathematical method of asymptotic analysis in order to simplify the complicated basic equations of fluid dynamics for those special flow regimes and to elucidate the essential mechanisms involved.

In the numerical simulation we emulate a moist atmosphere that is heated from the ground corresponding to a uniform insolation. In the updrafts generated in this way moisture condenses and leads to cloud formation. These cloud towers occur very concentrated and separated from each other. The figure shows the spatial distribution of cloud water in terms of microscopic floating droplets on a vertical slice through one of the updrafts. You notice a distinctive anisotropy of the cloud water concentration, i.e. horizontally the dimension is considerably narrower than vertically.

The simulation results approve quite well the basic assumptions of the theory.