As of September 2009, research on fence monitoring and distributed event detection in wireless sensor networks continues as part of the BMBF-funded project AVS-Extrem.

Fence Monitoring - A Use Case for Wireless Sensor Networks

The Fence Monitoring project is a use case for Wireless Sensor Networks (WSNs) focused on collaborative, in-network data processing. The goal is to develop a distributed event detection algorithm that can reliably report security relevant incidents (e.g. a person climbing over a fence) to a base station. The vision is that through cooperation of many sensor nodes the accuracy of event detection can be greatly improved, while at the same time saving energy by reducing multi-hop communication with the base station. 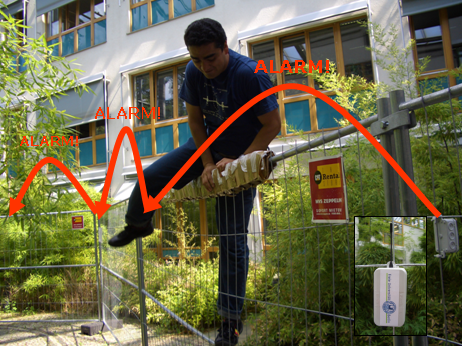 We have taken a layered approach to tackle the problem of in-network event detection, thereby isolating the subproblems of per-node event detection and coordination between neighboring nodes. A diagram of our architecture is shown below. 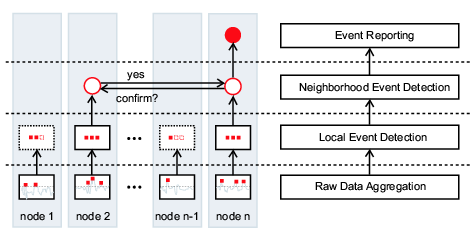 The different layers of our architecture implement a distributed, multi-step event detection algorithm. In the lowest layer, raw sensor readings are isolated from background noise and aggregated into a set of characteristic properties. The next layer checks whether known patterns appear in these aggregated values and identifies them as event candidates. In the next layer, the sensor nodes collaboratively decide whether a noteworthy event has in fact occurred within an n-hop neighborhood by exchanging information about recently observed event candidates. Finally, the uppermost layer reports confirmed events to the base station of the deployment.

In September 2006, we evaluated our event detection algorithm with a small deployment of sensor nodes attached to a construction fence in the patio of our institute. The video below illustrates the types of events we considered in our experiments.

In October 2008, we once again evaluated our reworked event detection architecture on the example of a wireless alarm system. 100 sensor nodes equipped with accelerometers were attached to the fence surrounding a real-world construction site. The task of the WSN was to detect security relevant incidents by recognizing four previously trained patterns in the lateral oscillation of the fence elements. As above, this video illustrates the types of events we considered in our experiment.