The trend towards an ubiquitous computing and communication environment, pushed from the generation growing up in an information age, slowly but steadily generates a demand for ad hoc networks. A whole lot of questions are to date still open issues when talking about those kind of networks, which need to organise themsleves without any centralized entity governing access, addressing, formation, service lookup or any other function, which we take for granted in our wired, Internet driven world. The DFG project 1140 addresses a vast range of issues and open questions and tries to solve them. Severaly German universities work together on that catalogue of questions, each one focusing on a certain topic but cooperating with each other to get the most out of a unified team effort. The focus here at the Computer Systems and Telematics group at the FU Berlin is the Quality of Service (QoS) aware unification of communication and cooperation patterns. The project's pseudonym is CoCo/Mo ((COmmunication COoperation / MObility). We work in close cooperation with the CoCo/Da (COmmunication COoperation / DAta) project here at the FU also part of the same DFG project.

This project started in April 2003 here at the university. It is an integral part of a DFG (German Research Society) project titled "Operating software for self-organising infrastructures in mobile networking systems". The focus here at the Computer Systems and Telematics group is the Quality of Service (QoS) aware unification of communication and cooperation patterns in ad hoc networks.

Ad hoc networks are dynamically reconfigurable, infrastructure less networks without central administration. The usually communicate wireless and are mobile. That imposes new challenges on protocol design and other lower network functions, but also on higher layers such as the application layer of the ISO/OSI reference model new concepts have to be developed. The following list shows some of the problems faced in an ad hoc context which are normally not considered in a wired environment:

In addition recent research showed that traditional wired technology failed in mobile ad hoc environments. TCP/IP for examples performs extremely poor under ad hoc conditions. To have a rough idea where this kind of network might play a role in the future here are a couple of example applications and szenarios:

All sorts of disaster prevention and recovery szenrios might benefit from the usage of ad hoc networks. For example firefighters in Australia might get sensor data directly on their PDA from sensors distributed directly into the fire by planes. That way they might be able to more effectively fight the fire or they might be able to avoid places which are too dangerous under the current or future conditions. Or sand sacks used to prevent dam breaches might be equiped with sensors used to find cracks in the dam indicating a possible future breach. These sand sacks might cooperate and send warnings to a central desaster prevention unit which then can efficiently stabilize the dam at weakend locations.
Another thinkable application would be spontaneous learning groups. With the increasing complexity of modern cellphones and PDAs it will soon be possible to widely communicate in ad hoc manner with other devices. If a student at a university is looking for learning material he might send a service request to devices of fellow students hoping they can offer him the desired documents. A vast ammount of other applications are possible like vehicle safety communication, tourist information systems, gaming environments and others. 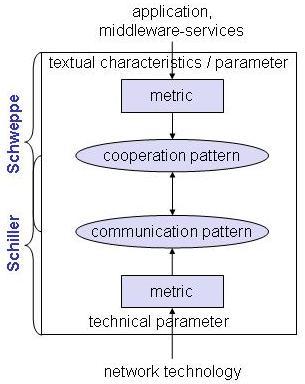 CoCo/Mo is not aiming at developing yet another ad hoc routing algorithm or introducing a completely new communication technology trying to solve the complexity of ad hoc communication on all layers of the ISO/OSI reference model. It also is not focusing on defining and developing new applications, which is more the focus of the CoCo/Da group.
We see that application and network layers have a huge delta in defining their QoS needs. The application will pass a parameter set down to lower layers to express its QoS demands and the network layers will have to make sure that those are met throughout the communication process. In the middle there has to be some kind of translation process. Additionally applications cooperate in certain ways with each other. Deriving a communication pattern from those cooperation patterns, utilizing the scarce rescources in an optimal way and also trying to assure a certain QoS is one aim of this project. Also the component to be developed should be able to give feedback of some kind back to the application to signal changes in the network so the application can adapt to new networking conditions.