A Modeldriven Eclipse-based Tool-Chain for Developing, Testing and Prototyping

Over the course of time the application range of Wireless Sensor Networks will become more varied and complex. Therefore it is increasingly important to programme it with the corresponding efficiency. Programming can become more productive and robust, if it is subject to a systematic and structured software development process, which enhances application and accommodates for the sensor network’s operating conditions. The pivotal approach for this can be found in the automated Software development process, during which administrational functionalities, which are suitable for the operation of the Sensor Network, are integrated. This constitutes the approach of our Tool-Chain ScatterClipse. The architecture centric method of the model driven paradigm is used for the automation. New in this case is that the models are not only used for documentation or visualisation: The semantic and expressive formal models also act as a method to completely and concisely represent important concepts as well as the domain’s (platform’s) basic conditions. Such specific, yet technology neutral models, are inputted into the configurable code generator and after their validation the corresponding software artefact is generated and distributed to the appropriate platform (wireless sensors nodes).

The high degree of automation accelerates the development and testing of applications, which are already running on sensor nodes. Furthermore substitutability and reusability of the software artefacts are increased, because the artefacts, alongside the automated code generation, are represented by their respective models. Both increase the development process’s productivity. The model driven code generation is used to furthermore generate a largely tailor made code, so that only the required amount of code is generated for the sensor node’s intended roll. Thus the scarce memory space is not only optimised, but also unnecessary calculating and energy intensive software modules are avoided. The decreased portion of manually written code also reduces the possibility of a programmer’s careless mistakes. In this process the validation on the model level plays an important role, because the earlier a mistake (bug) is discovered in the development process the more robust and reliant it will become.

For automation purposes an appropriate generative infrastructure is developed (ScatterFactory and ScatterUnit ), which constitutes the backbone of our platform or Tool-Chain. For the modelling a graphical editor, based on the Eclipse Modelling Framework and the Graphical Modelling Framework, was developed. For the examination of the basic conditions, which are linked to the respective models, a real time validation was integrated into the editor, which also makes the development process more robust. OpenArchitectureWare framework is used as the code generator, where the corresponding code is automatically generated from the inputted model and this code is then deployed onto the installed sensor nodes. All frameworks are Eclipse platform open source projects. Furthermore the emphasis lies on the integration of essential functionalities, which regard the administration and Management of the Wireless Sensor Network, with the model driven software development process. These shall not be isolated, but shall be seamlessly combined with attributes like configuration, bug fixing, monitoring, user interaction as well as sensor status visualisation (ScatterPlug and ScatterEditor).

This combination potential is an important character of the platform. The realisation of such combinations was achieved by the plug-in oriented architecture in accordance with the Eclipse platform. One the one hand the user can operate certain plug-ins (functionalities) independent from each other, so that a “separation of concerns” is achieved, and on the other hand the user can navigate the different plug-ins collaboratively at the same time, whereby coherence is achieved. In order to improve the platforms productivity, its main features can be accessed in local as well as in remote, or internet based, mode. For this reason one can, for example, operate the administration and configuration from a computer in one location (for instance in a development or test laboratory) while the sensors are deployed in real world conditions (for example an experiment field) in a different remote location. This was realized by an ordinary client/server architecture based on Java RMI.

ScatterWeb is a platform for teaching and prototyping WSN, which was developed by our Work Group Computer Systems and Telematics of the Free University Berlin. 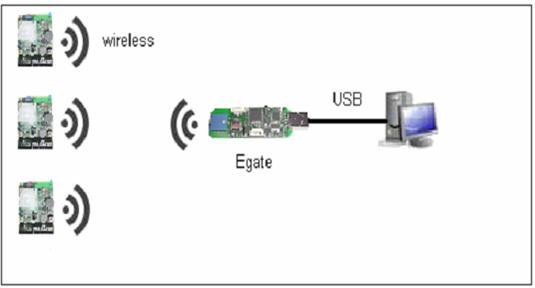 The hardware components of the ScatterWeb platform mainly consist of Embedded Sensor Boards (ESBs), the newly developed configurable Modular Sensor Boards (MSBs) and and the sink (eGate), which is connected to the PC via USB. The Sensor Boards have in addition to a controller and transceiver many functions at its disposal, such as a sensor for luminosity, vibration, temperature and IR movement detection, a beeper, LEDS (red, yellow and green), as well as a microphone. Thus a prototype of a comprehensive monitoring sensor is created, which makes studying the insertion of WSNs in various areas and scenarios – like environmental monitoring, intelligent buildings, Ad hoc process control, etc. – possible. With this ability, various applications running on the computer can communicate with ScatterWeb Sensor Boards via the eGate, and vice versa, which makes data-gathering, debugging, monitoring, over the air software updates, etc. possible. Read more about ScatterWeb. 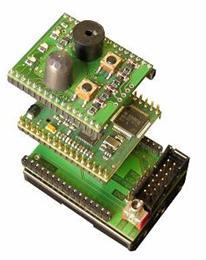 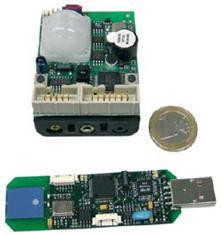 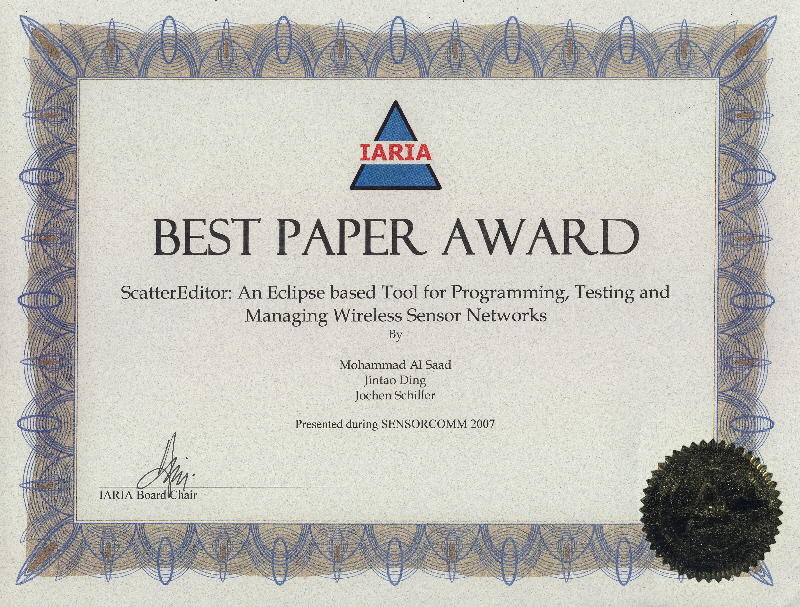