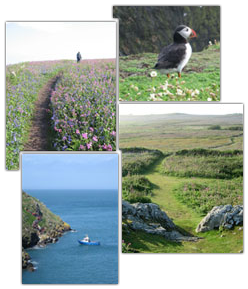 Skomer Island lies just off the coast of Pembrokeshire in Wales. It is a UK National Nature Reserve and has been designated as a Site of Special Scientific Interest (SSI). It is home to one third of the world's population of Manx Shearwaters, and holds large populations of Puffins, Guillemots, Razorbills and an amazing variety of other wildlife.

Skomer Island sits in the rich environment of the Irish Sea which is home to a variety of complex and important ecosystems. The seabird populations on Skomer Island rely heavily on these ecosystems, and changes in the birds behaviour is indicative of the general health of these sytems.

Skomer Island is also an important research centre, where the rich variety of wildlife it holds has been studied and monitored over many years.

Skomer Island on a map